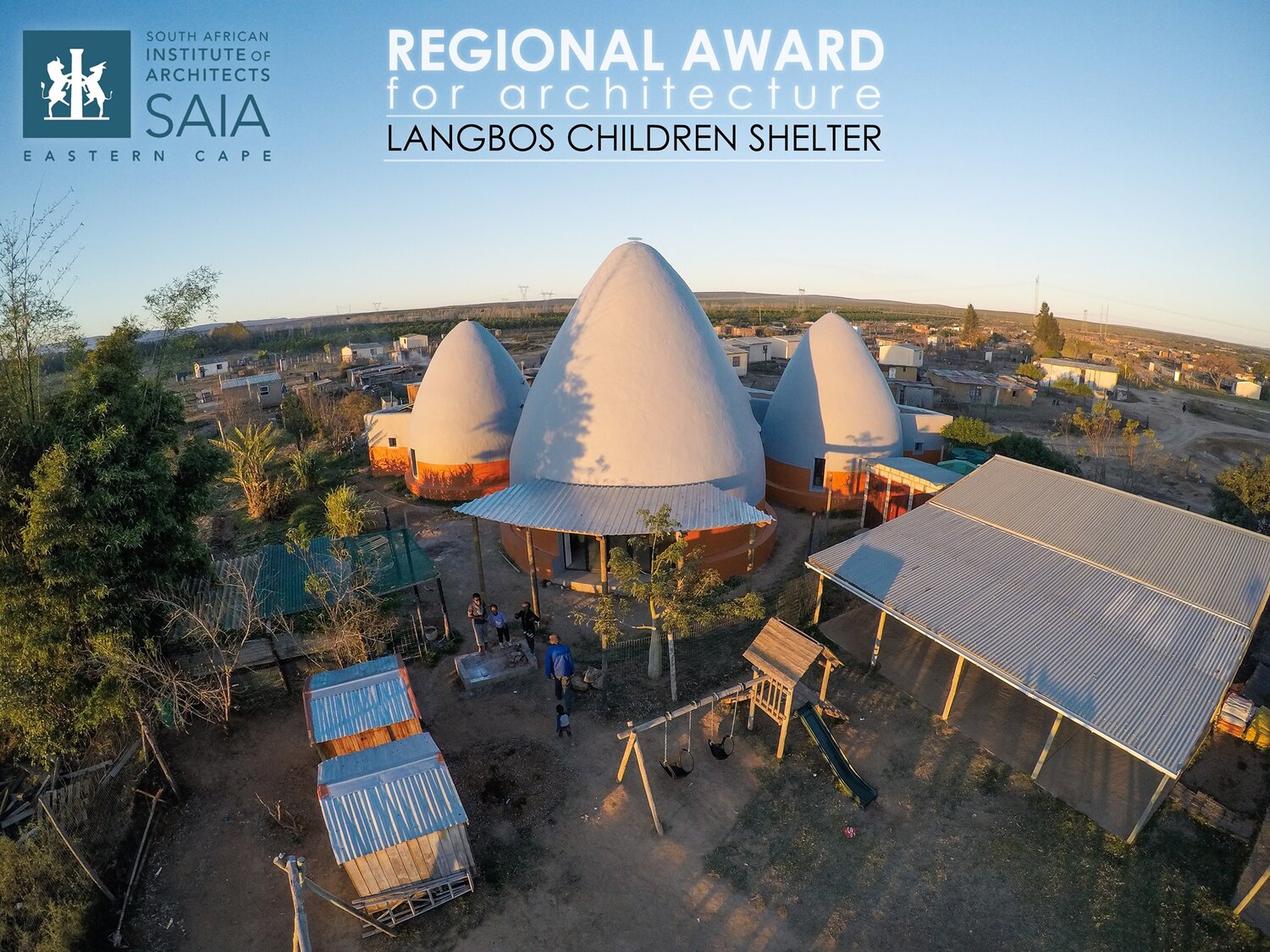 In 2017, we constructed the Langbos Children’s Centre as an infrastructure addition to the Langbos Crèche and Langbos Community Centre in Addo, Eastern Cape. This facility serves as a multipurpose platform to launch new youth-centered initiatives and interventions Langbos 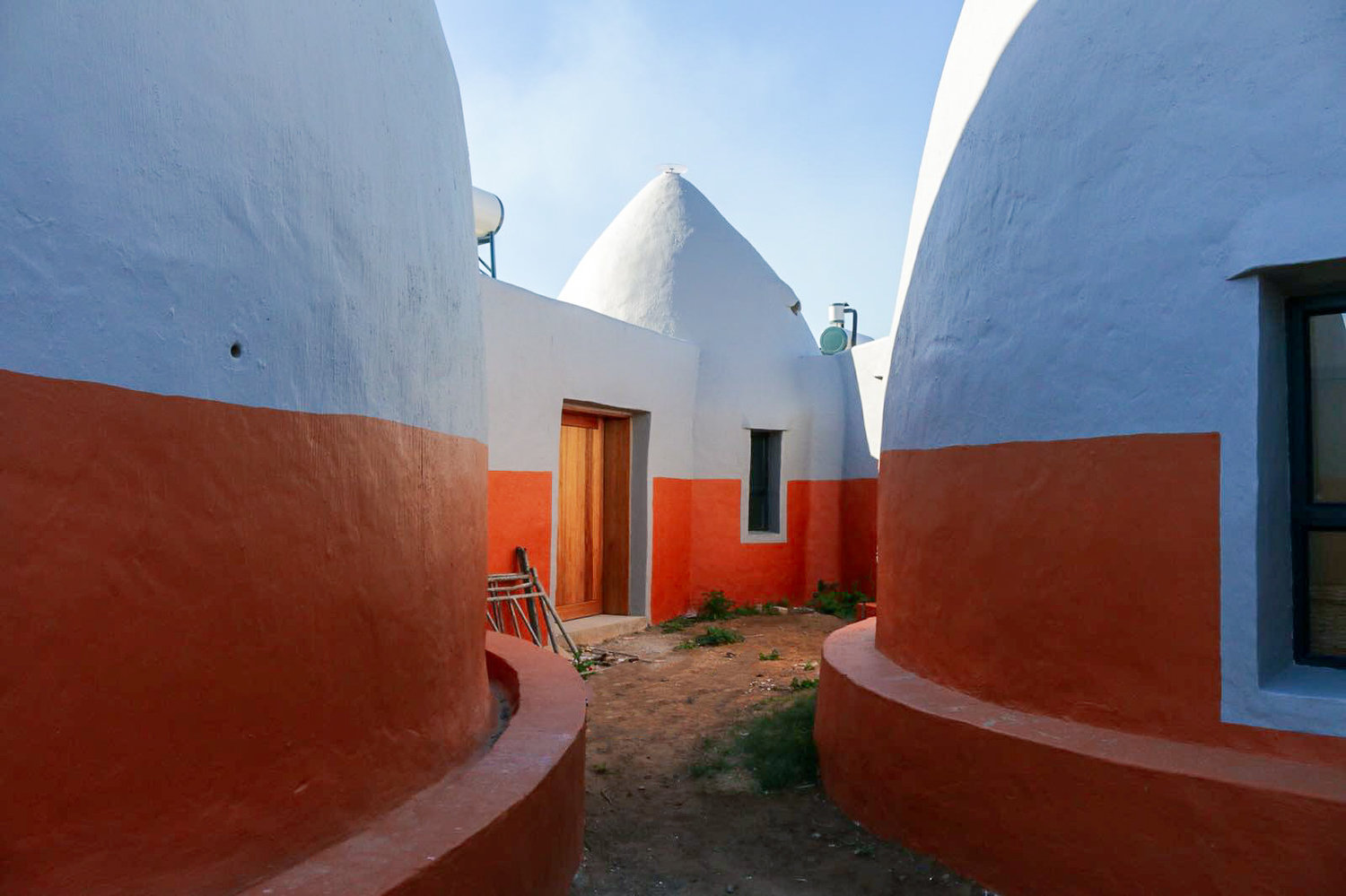 In constructing the center, we utilized an alternative “eco-building” method called Superadobe as a way to involve the local Langbos community and make the most efficient use of our limited material resources in Langbos.  Superadobe is a simple building method that uses local soil mixed with a small amount of cement to build beautiful and strong dome structures based on simple geometry and engineering principles.  Superadobe integrates traditional earth architecture with contemporary global safety requirements and has been endorsed by the United Nations as well as awarded the prestigious Aga Khan Award for Architecture (California Institute of Earth Architecture). 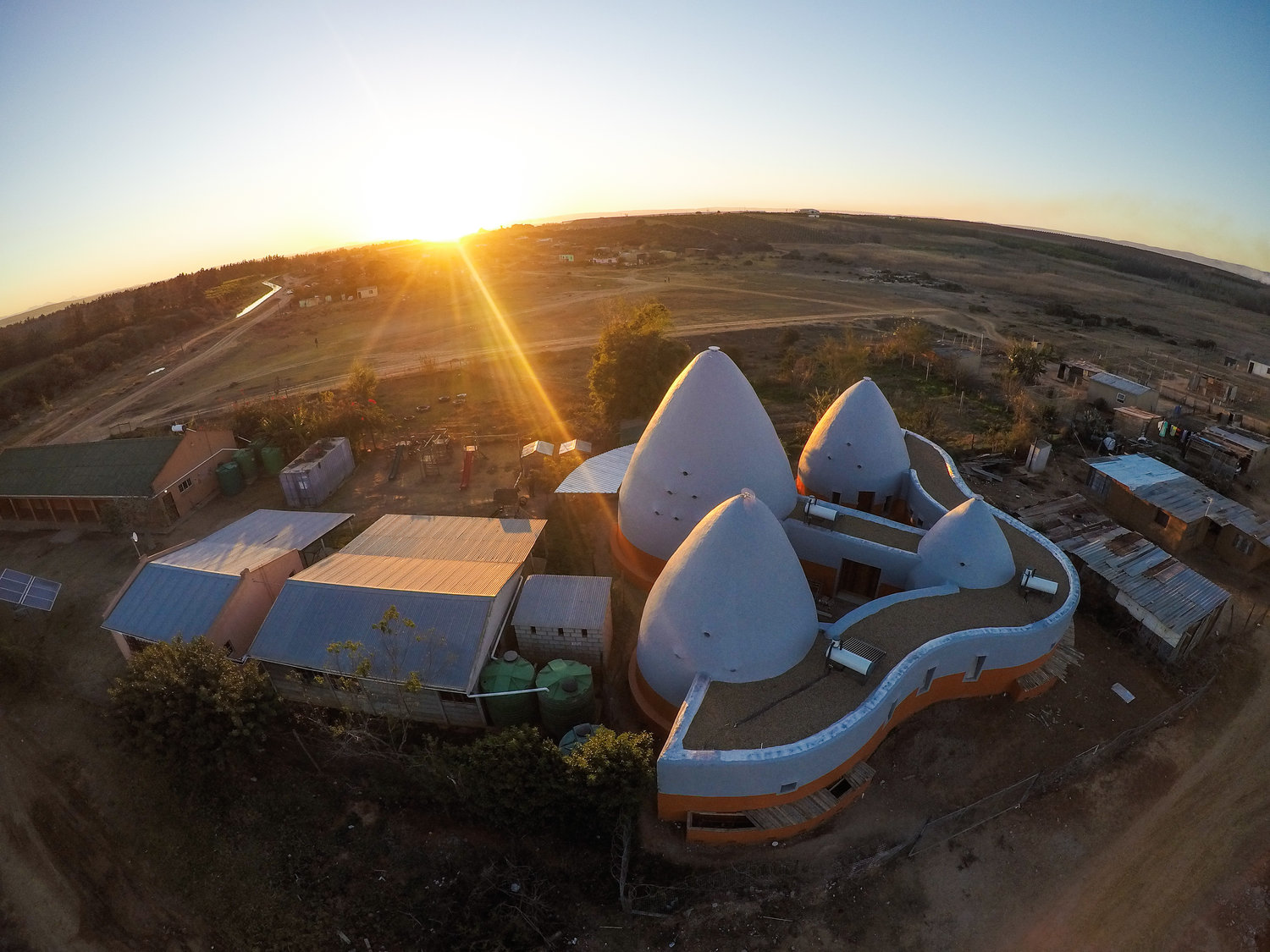 Using Superadobe allowed us to recruit and train an all-local team in Langbos to carry out this construction project. As a result, we were able to create jobs and skills training, provide daily nutritious meals to everyone involved, and connect with community members while giving them ownership of the project. Together, 30 Langbos residents came together for over 35,000 paid hours of collaborative work to build this unique structure 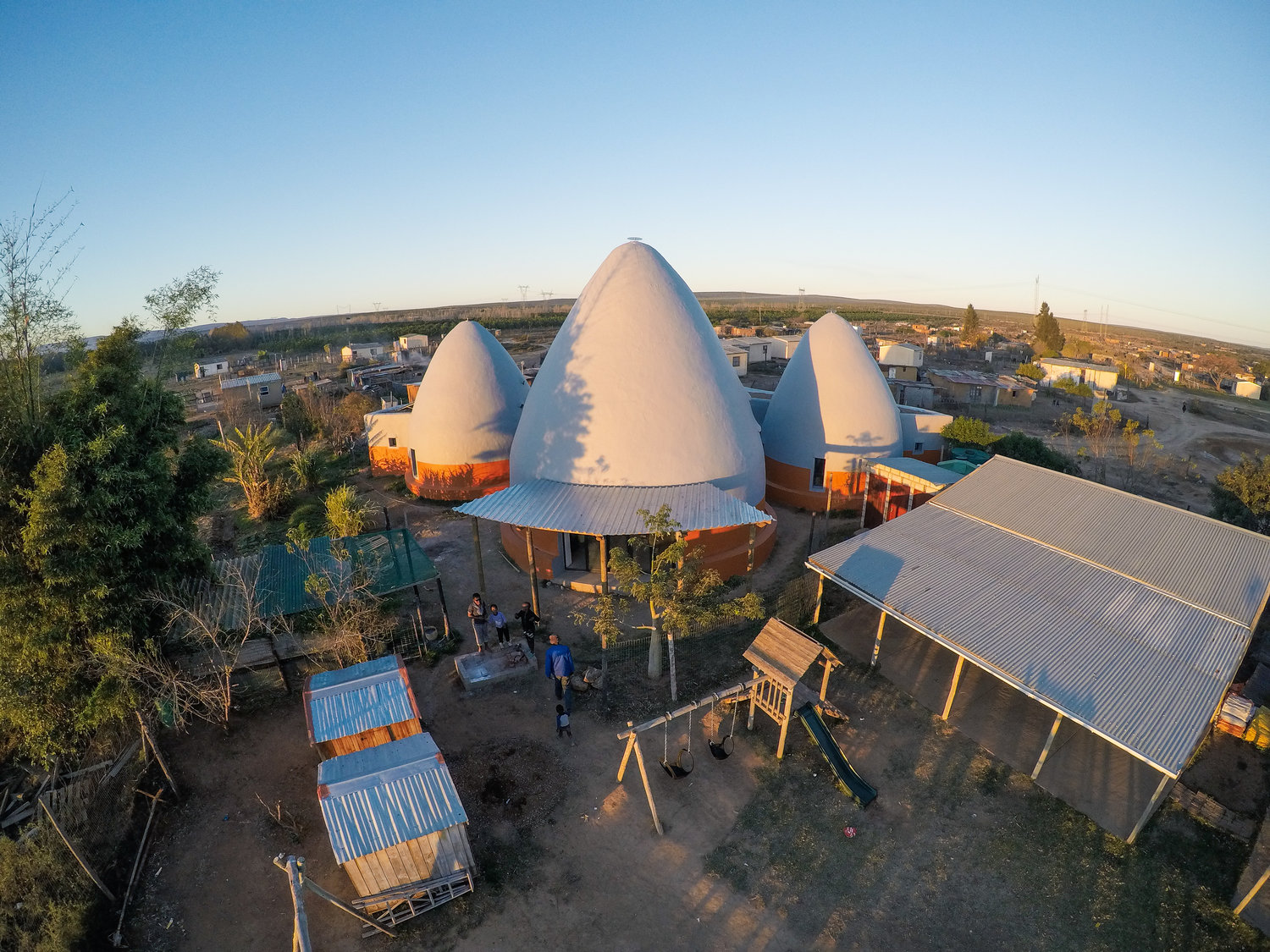 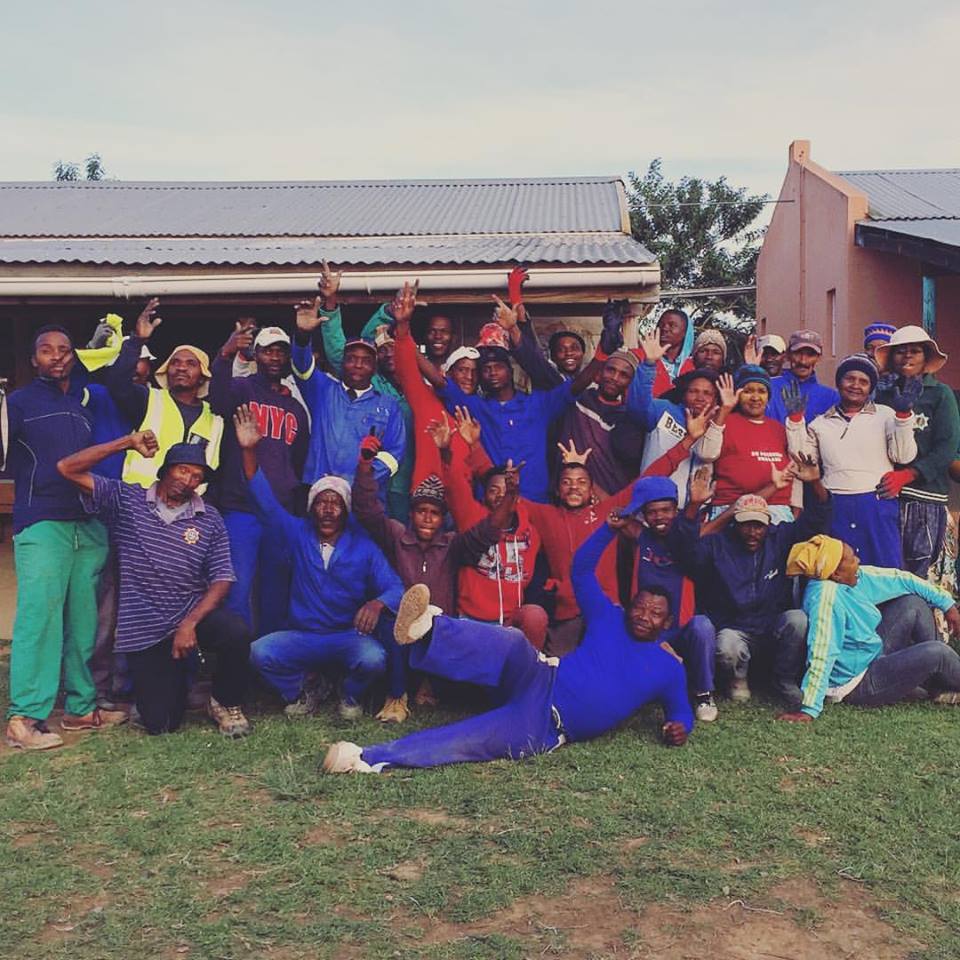 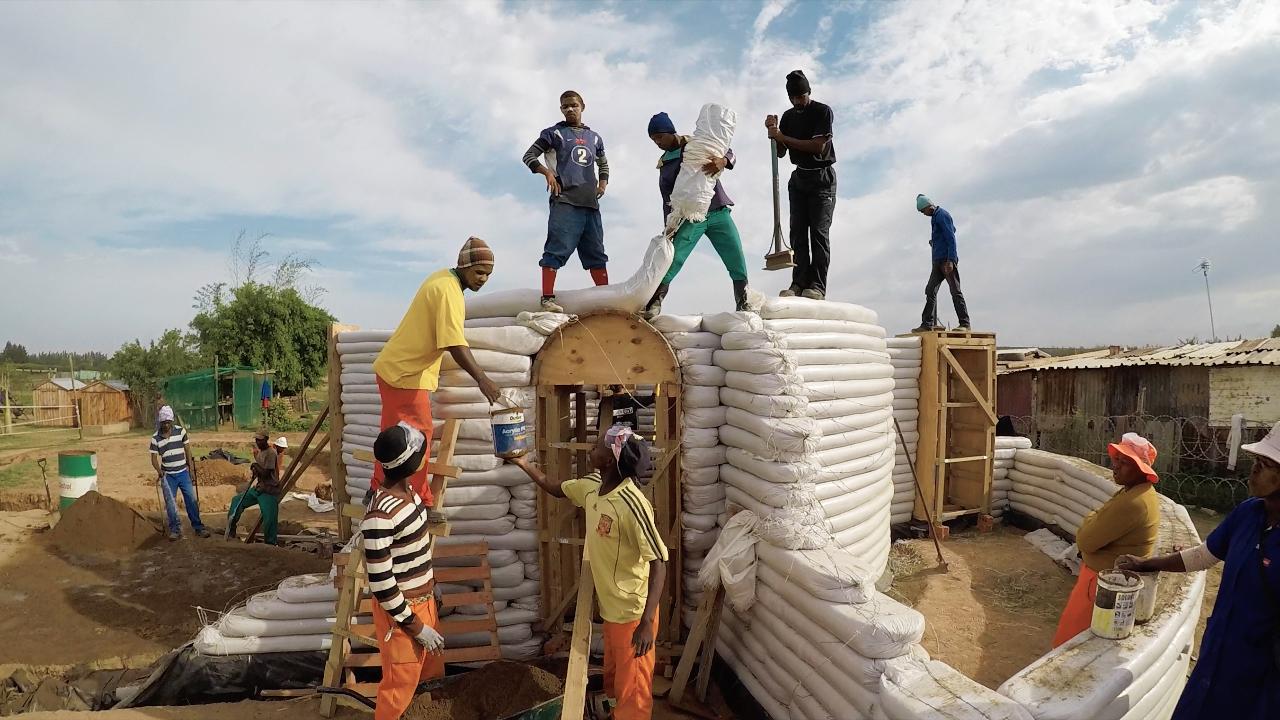 This team of “community builders” included men and women of all ages working together to learn new skills and overcome challenges throughout the project. Aside from a competitive wage and the satisfaction of uplifting their community, they were also provided with health support and professional development, including free trips to the local clinic and CV writing. Some team members saved up their earnings during the project to purchase their own truck, which allowed them to take on and complete another paid Superadobe project to build an outdoor classroom for a nearby school. Others have also continued to stay involved with Intsikelelo projects— helping us conduct our community research, partaking in our education sponsorships, and continuing to work in various community-focused roles at the Langbos Crèche and Care Centre. 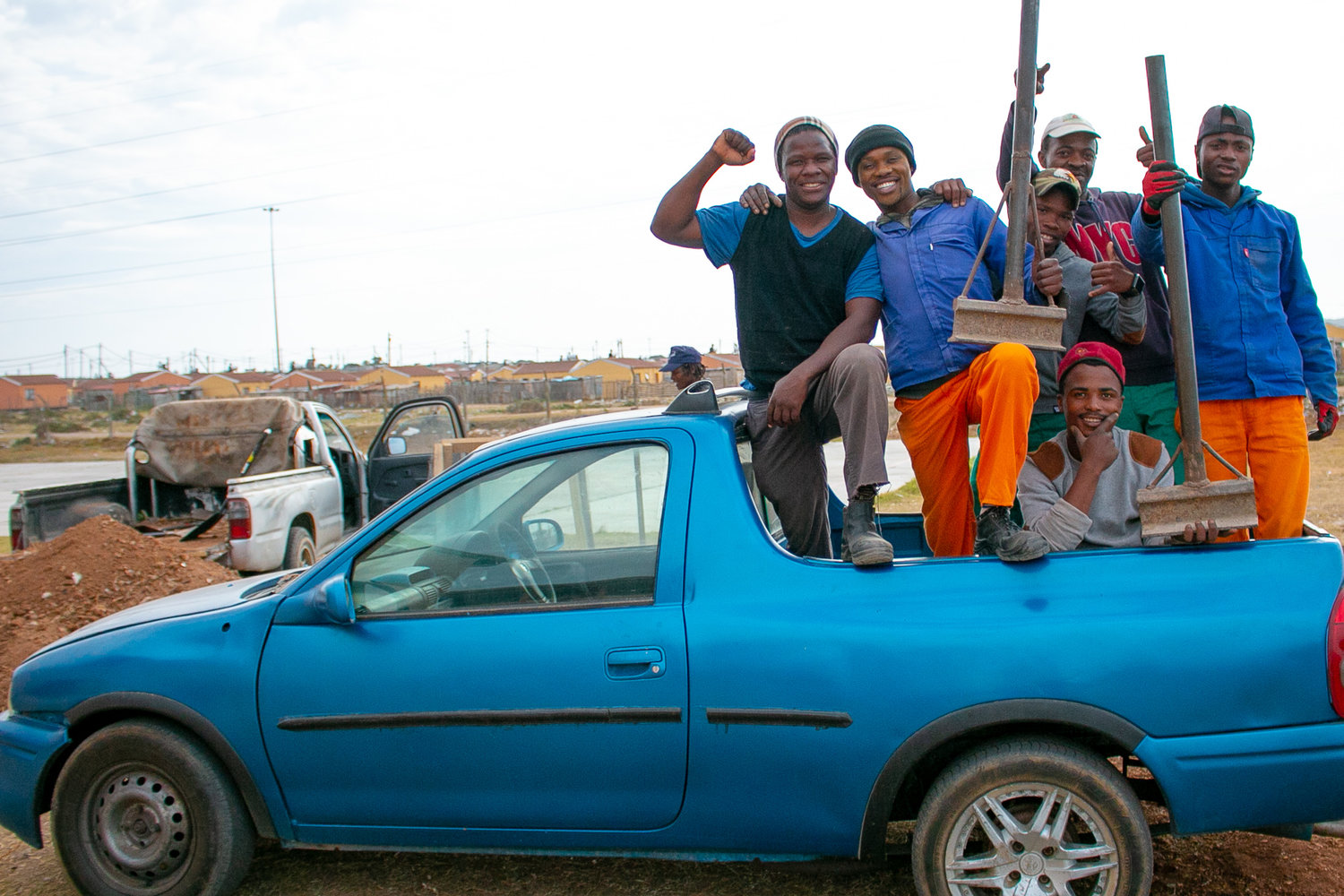 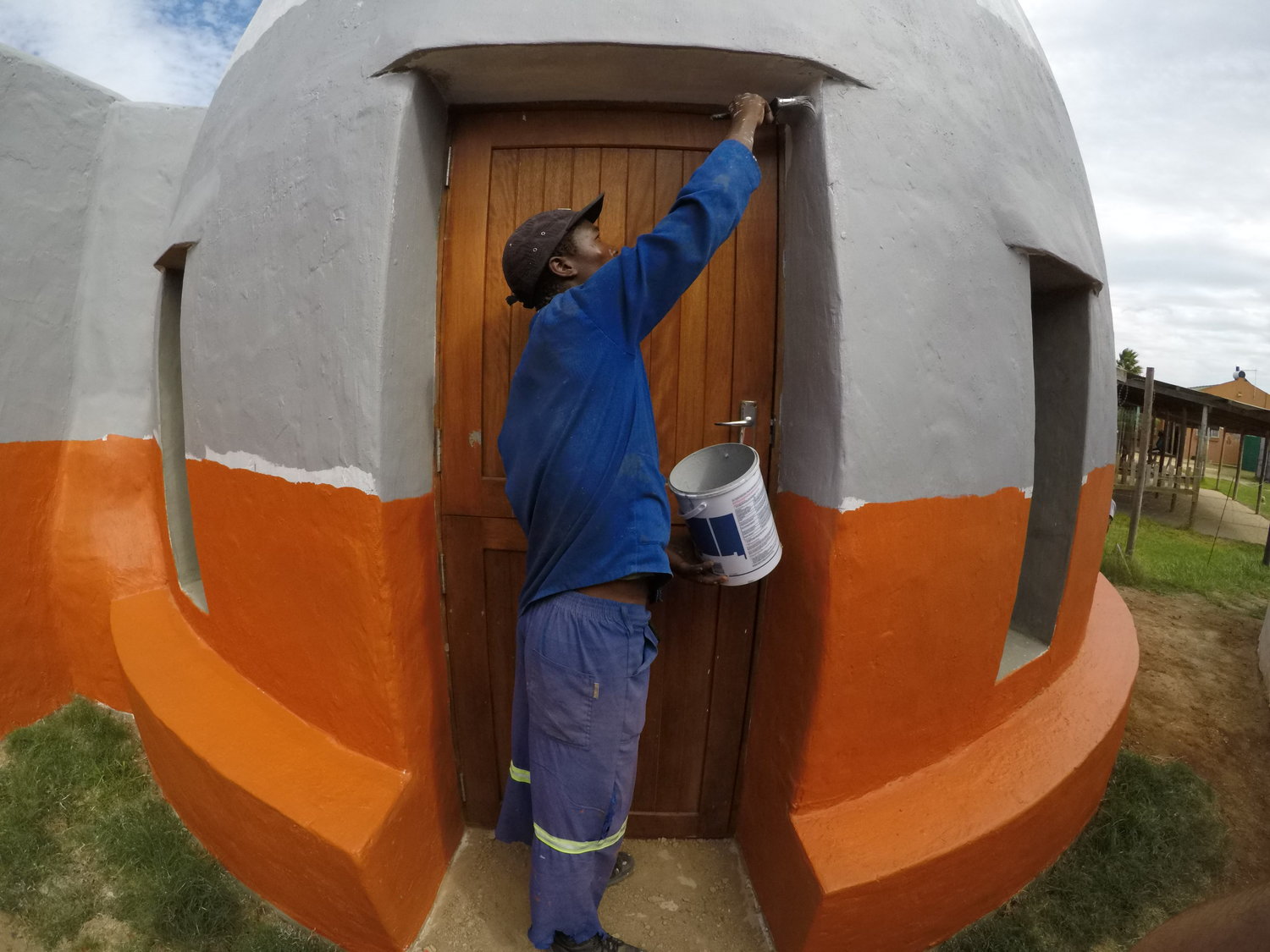 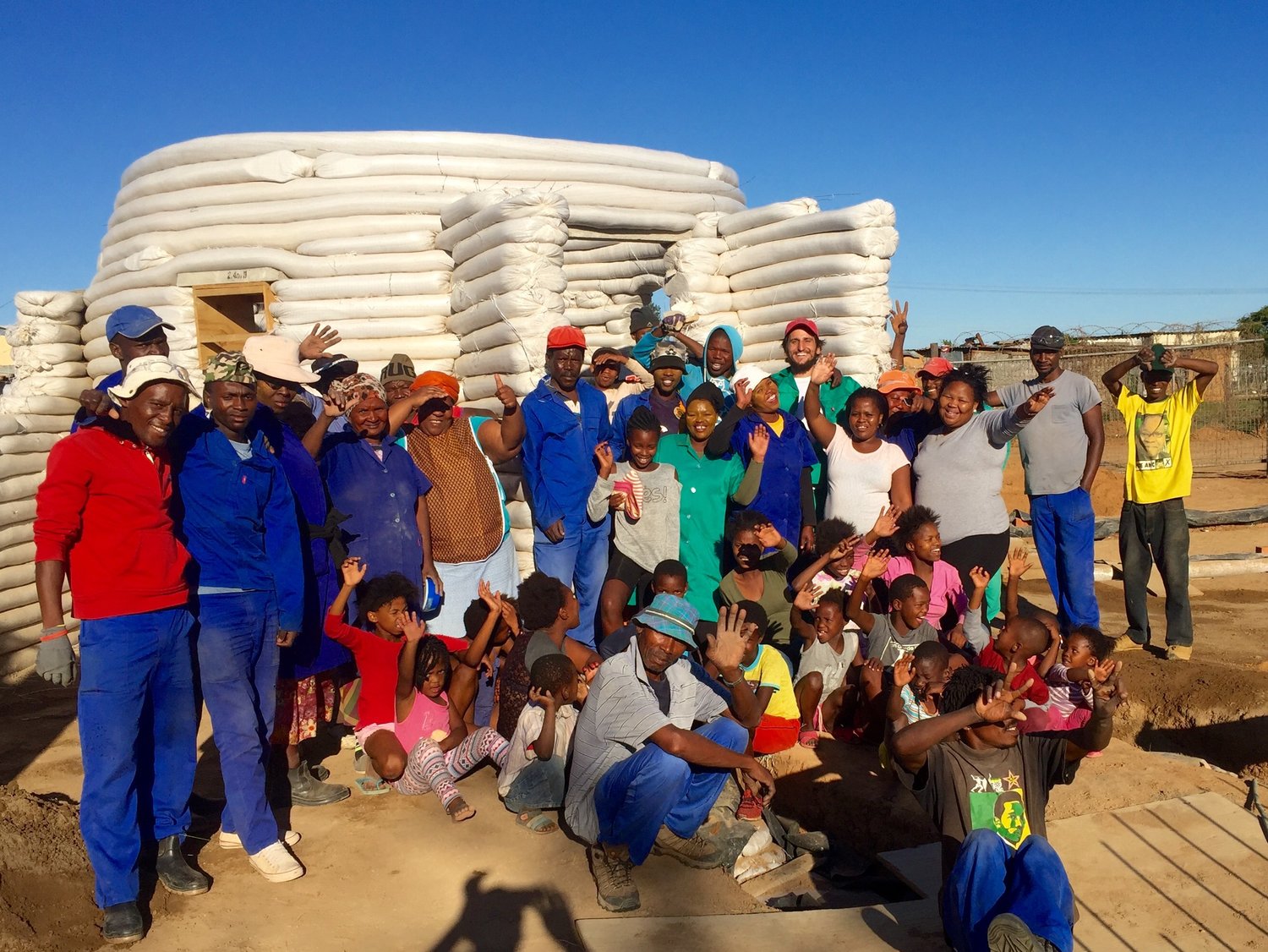 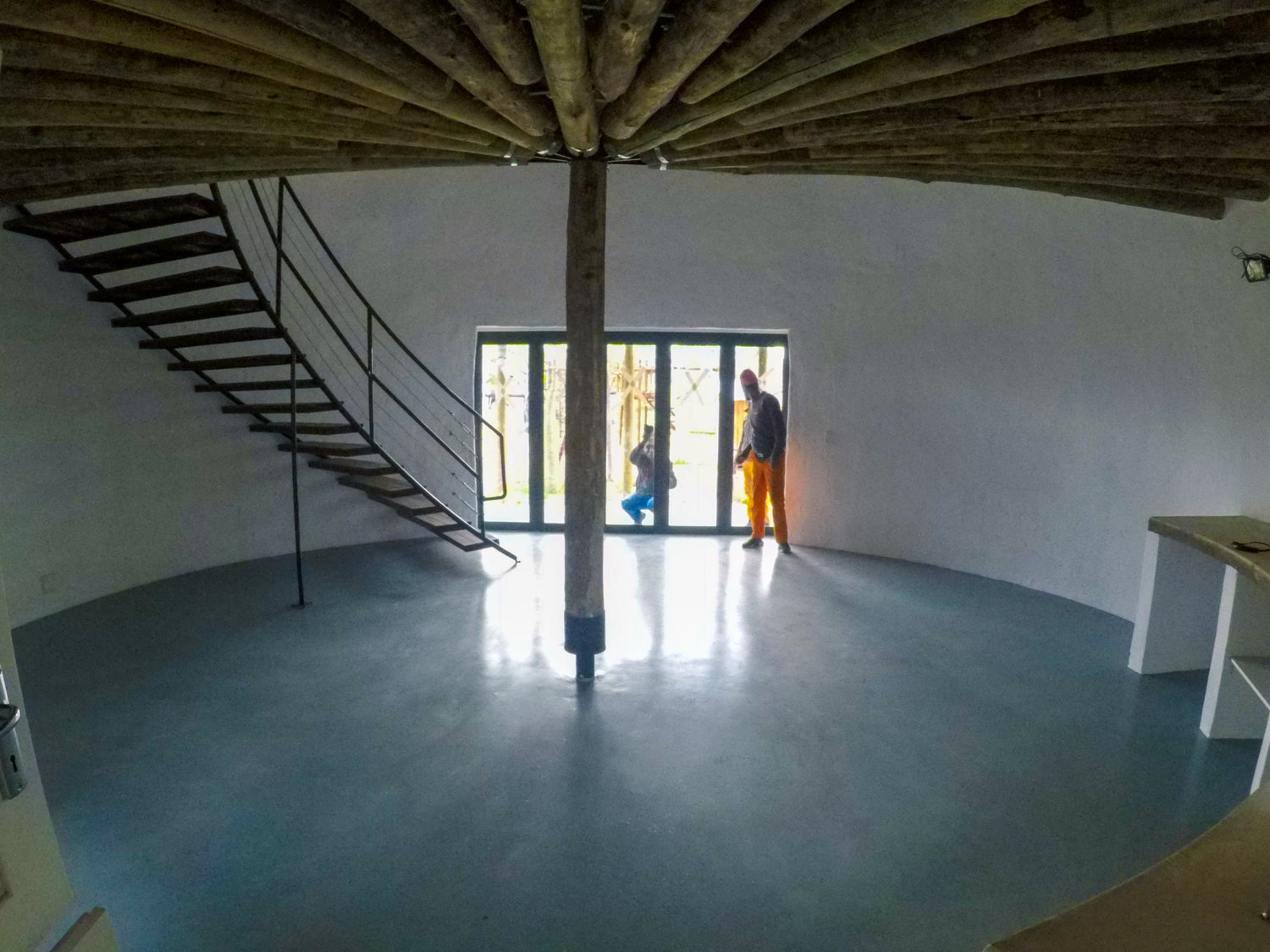 This project is supported by GoPro for a Cause, Eco Domes Africa, Jason Erlank Architects, Structural Solutions, Aluminium Purpose, Scribante Concrete, ANSO Aluminium, Chris Howes Construction, Citrus Growers Association of South Africa, Sika South Africa, Bayview Construction, and Mayibuye Ndlovu Development Trust.  It was made possible through the collaboration of these partners, as well as the generosity of individual donors and fundraising campaigns around the world.

“Unlike many foreign-founded aid organizations, Intsikelelo provides a platform that empowers local, community-driven initiatives… Everything the organization does begins and ends with the community.” – GoPro for a Cause

Langbos is an informal settlement situated in the Addo district in the Eastern Cape Province of South Africa. Addo is home to the popular Addo Elephant National Park which attracts a lot of tourists to visit the area. It is also an internationally renowned citrus farming region which massively contributes to the agricultural economy of the country.

Attracted by the work offered by the citrus industry and the national park, over time many new communities have formed in the area. Langbos, the poorest of the townships in the area, has organically created an informal settlement with little to no infrastructure on a portion of land surrounded by citrus farms.  A great majority of the Langbos community work on the citrus farms. However, citrus farming only provides seasonal work, which in turn means that for the months between December and March these locals are unemployed.

The latest facility required is a shelter which will form an extension to the existing complex built and support vulnerable kids who have become orphaned or have fallen victims of child abuse. The goal for the shelter to create a temporary place of safety for the kids before being reintroduced seamlessly back into the community.  It will house up to 12 children as well as rotating caregivers.  In addition, there will be eating, living, and studying areas as supporting functions to the bedrooms. In addition to the spatial requirements, emphasis is also placed on designing a home for vulnerable children and the need to involve and uplift the community throughout the building process. One of the end products of the project should also give back to the entire community by incorporating and facilitating the communities need for electricity and usable water.

After a number of site visits, interacting with the community and throughout the design process – the concept which formed was identifying the organic nature in which the Langbos settlement occurred. Small informal dwellings, built by the community themselves with traditional methods of construction, are positioned on vast open spaces which allow for each household to create their own identity and find and cater for their own needs. Secondly, the vast open spaces create easily accessible circulation within the settlement and magnificent gathering spaces for the adults to meet and the kids to play in. The nature of this settlement maintains a unique identity and contradicts the rigid and repetitive way in which the South African Government is imposing the Reconstruction and Development Programme (RDP) housing on these areas.

Rather than impose one large structure, we have instead introduced a complex of smaller structures which mimic the settlement pattern of Langbos. The structures are positioned in such a way that there would still be ample outside space which will encourage the kids to spill out into and play. The construction best suited for the desired organic loose-fit complex is a construction method called superadobe, a version of rammed earth construction, which has been previously used in the Addo area and can easily be taught and reused by the local community. The structures created by the superadobe become solid,strong cylindrical elements which signify stability and are highly insulated, making the rammed earth volumes both sculptural and functional. The aesthetic quality achieved, allows the structures and existing community complex to become an iconic presence within the settlement and potentially could attract an interest from the international tourists which visit the Addo area. Together with the superadobe structures a low-level, lightweight canopy is used to connect the sculptural forms and furthermore tie it back into the low-level heights of the existing dwellings around the site, emphasizing the horizontal nature of the local Langbos architecture.

The existing complex has established a main entrance which feeds activity to all the facilities and allows for the complex to remain secure. It is for this reason that the same entrance and existing circulation has been maintained and used to feed into the shelter, which has been positioned on the most private portion of land within the complex.

Furthermore, a secure premise is emphasized by introducing a boundary wall which houses all services and secondary circulation, yet forms a decorative element facing the settlement and creates areas which the community can access for shade and retrieving water.

With establishing a complex which provides a sense of connectivity and openness between the internal and external spaces, a level of security and supervision needs to be offered between day time and night time activity. The circulation and connectivity routes designed within the complex do just that. During the day the day all the openings can be opened to encourage outside activity while at night all doors leading outside can be locked allowing connectivity only via the carers room.

It is believed that by introducing an architectural sophistication and establishing a building which draws cues from the local settlement and architecture it will set a positive precedent for the local community and symbolise progress, yet respect and maintain Langbos’ unique identity.